In the core of Climate change: Global warming, a greenhouse and some gases

Home > NomNomKnowledge > In the core of Climate change: Global warming, a greenhouse and some gases

In last week’s jargon buster, we explored Earth’s systems and Climate Change. This week, we dive deeper into what’s causing it and how.

What is Global Warming?

When we talk about climate change, another term that usually comes up is Global Warming. These terms are often used interchangeably, but they’re not the same thing!

Whereas climate change refers to the long-term changes in the Earth’s weather patterns, global warming describes one aspect of this: the steady rise of temperatures around the globe.

Global Warming: a gradual increase in the overall temperature of the earth’s atmosphere generally attributed to the greenhouse effect caused by increased levels of carbon dioxide, CFCs, and other pollutants. – Oxford Dictionary

Of course, temperatures on our planet have always fluctuated (Ice Age, anyone?). So when we talk about global warming, we’re usually talking about the rise in temperatures caused by human activities. 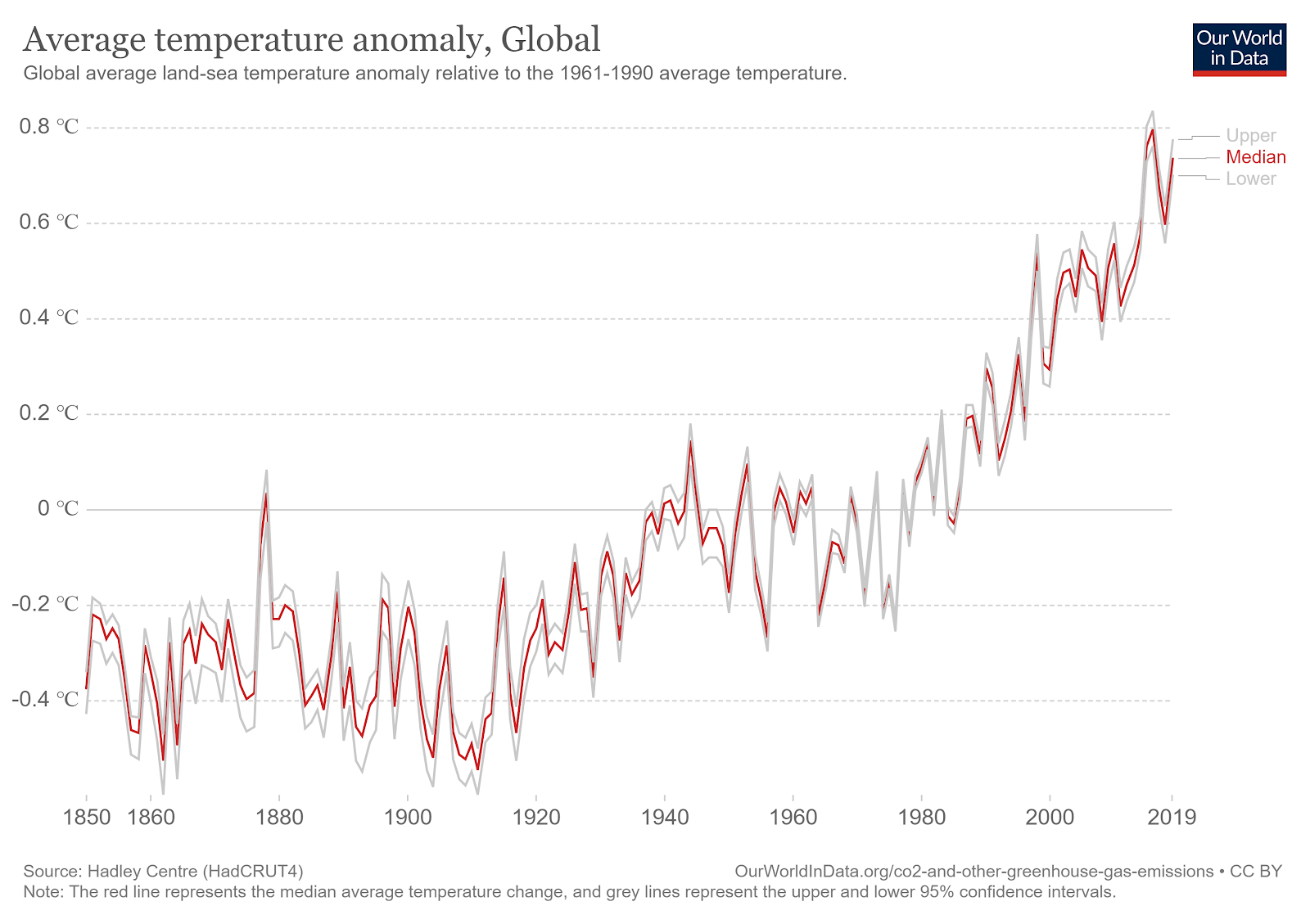 Since the industrial revolution, human activities tend to involve burning lots of fossil fuels, chopping down trees, and farming crops and animals. All these activities emit lots of greenhouse gases, ehance the Greenhouse Effect and cause temperatures to rise.

Let’s start by saying that the Greenhouse Effect in itself is not a bad thing. In fact, without it, us humans and many other species wouldn’t be around these days.

The greenhouse effect is a completely natural process that warms the surface of the Earth. When radiation from the sun (sunlight) reaches our atmosphere. The light gets absorbed by the land and oceans and is converted into heat, which is then released back into the atmosphere.

And – side note – some of the solar radiation isn’t absorbed by the surface at all but gets immediately reflected back into space. White surfaces reflect more light than darker surfaces, which is why the melting of the icecaps is such a worrisome symptom. As more sunlight will get converted into heat and caught in the atmosphere, leading to higher temperatures and to more melting and so the feedback loop continues.

But ok… Back to the greenhouse effect. The gases in Earth’s atmosphere don’t absorb the sunlight, but they do absorb and trap the heat. So think of our atmosphere as a blanket, that keeps us nice and warm.

That all sounds pretty cosy, so what’s the problem again?

Since the industrial revolution, many of the activities that support human life, emit lots of greenhouse gases, leading to larger concentrations in our atmosphere.

Our population has rapidly grown from 3 billion in 1960 to almost 8 billion people today, meaning there’s are a lot more of these activities going on.

Our activities have distrubed the balance between incoming and outgoing radiation. More gases in the atmosphere means more heat is absorbed and trapped, and so, the temperature rises. Just imagine that blanket getting thicker and thicker.

Almost 75% of worldwide emissions come from our energy consumption. We produce electricity, heat, and energy for the production of goods. We use it to manufacture raw materials, process food and run other industrial activities that fuel our consumption-driven economy. Another major contributor is agriculture and other land-use, adding just over 18% to the total.

Gases trapped in the atmosphere, absorbing heat? So what exactly are these greenhouse gases?

Methane is a by-product of fossil fuel production but is mostly associated with livestock farming, or, to put it bluntly, with their manure and farts. On top of that, large amounts of methane are released when waste decomposes in landfills. This is a growing problem in our take-make-waste society.

When fuels are burned Nitrous oxide is emitted. The largest source of this gas are agricultural soil management practices, such as using fertilizers and burning residues.

Fluorinated gases are not very big in numbers. But do have a potent greenhouse effect and are, unfortunately, widely used as refrigerants. Although the two key substances – chlorofluorocarbons (CFCs) and hydrochlorofluorocarbons (HCFCs) – (try to say that 3 times in a row…) are phased out of production now, they are still in circulation in our refrigerators and air conditioners today and 90% of their emission occurs at disposal.

Last but certainly not least, is Carbon Dioxide. Nowadays, we can hardly talk about climate change and not mention carbon. But to bust some jargon: carbon itself is a chemical element (the 6th one on the periodic table!) an essential building block of life, and what we actually mean here is Carbon Dioxide.

More confusion can come from the fact that sometimes when people talk about reducing carbon, they actually mean all greenhouse gases. (Tip: never be afraid to ask…)

Carbon Dioxide or CO2 is the primary greenhouse gas emitted from human activities, mainly from burning fossil fuels like coal, oil, and natural gas, as well as burning solid waste. On top of that, we are also chopping down a lot of trees that remove and store CO2.

CO2 is not the most potent gas, but it is by far the most abundant gas and it also stays in our atmosphere a lot longer than the others. And it made our oceans more acidic (as we’ve seen last week in the planetary boundaries) affecting a lot of life in the sea.

What do we need to do to slow down Global Warming?

To slow down global warming, we need to stabilize CO2 (and the other gases) in our atmosphere. It was long modelled that carbon emissions wouldn’t peak until 2030. However, CO2 emissions dropped 7% in 2020 (would it be weird to say thanks, Covid-19?), and scientists now say this might have been the peak already. Let’s hope so!

Human activities have raised atmospheric concentrations of CO2 by 48% above pre-industrial levels found in 1850. This is more than what had happened naturally over a 20,000 year period (from the Last Glacial Maximum to 1850, from 185 ppm to 280 ppm). – Nasa

It’s sad to realise that we are causing the problem, but we can also come up with solutions. Reducing our dependence on fossil fuels and shifting to renewables is an obvious one. But our production and consumption patterns are also in dire need for a make-over.

And not only do we have to lower our emissions of greenhouse gases we also need to extract existing carbon dioxide from the atmosphere. For instance by sequestering our soil and regrowing forests; something we’ll explore next week.

We have the creativity and ability to do it, but we do need to change our perspective on, well, a few things. Let’s rethink them together?